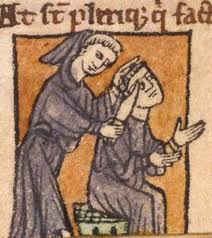 At the beginning of July, I attended the Religious Men in the Middle Ages conference at the University of Huddersfield. This conference was an interdisciplinary exploration of the intersection of masculinities and religious identities, across the entirety of the Middle Ages.

The conference began with the first of three plenary sessions: Professor Michael L. Satlow (Brown University) speaking on ‘Antique and Early Medieval Rabbinic Thought on Constructions of Masculinity and Religiosity with Particular Reference to Torah Study’. Satlow explored the representations of religious masculinity in Rabbinic thought, particularly as relates to hegemonic discourses of masculinity and desire. Using ancient and early medieval examples, he argued that the evident shift from the metaphor of Torah study as the ‘salve’ or ‘cure’ for desire to the martial imagery of ‘conquest’ and ‘domination’ of desire created a discourse of masculinity that, though it differed from hegemonic discourse, did not oppose it. Satlow’s engaging and informative address set the tone for the conference to come – the definitions of ‘religious’, ‘men’ and ‘Middle Ages’ were to be broad, but also understood with close attention to specifics and contexts.

My own paper – ‘Intersections of Christological Devotion and Romance Masculinity’ – was in the first of the parallel sessions that followed the coffee break. The panel I was in was entitled ‘Christocentric Piety’, and also included Matthew Hoskin (University of Edinburgh) – speaking on ‘The Close Proximity of Christ to the Male Monk in John of Ephesus’ Lives of Eastern Saints’ – and Carolyn Muir (University of Hong Kong) – ‘Bride/Bridegroom Revisited: Further Thoughts on Men and Mystic Marriage’. Both Hoskin and Muir gave fascinating papers, and I was glad to be first in the session so I could devote my full attention to my co-presenters. Hoskin’s paper struck a good balance of depth and accessibility, which was good for those of us less familiar with the Eastern traditions. Muir spoke on various presentations of John the Evangelist as ‘bride of Christ’, and was illustrated with both visual and textual examples. That our panel spanned literary, historical and art historical perspectives, with some good discussions and parallels drawn, indicates the interdisciplinary nature of the conference as a whole.

Highlights of the first day also included, for me, papers by Lisa Kranzer (University of Birmingham) and Sarah Bastow (University of Huddersfield) discussing self-perception, writing and exile during the Reformation. It is still somewhat unusual to get papers on Reformation writings at a self-styled ‘medieval’ conference, but Kranzer and Bastow’s contributions allowed for a consideration of periodization and cultural shift, while also highlighting the continuity of certain (gendered) constructions of identity.

So, the first day began with a discussion of ancient Rabbinic thought, and ended with papers on Elizabethan Protestant reform.

The second day was equally diverse. I attended papers on male devotional practice, demonstrations of personal faith by warriors, pastoral responsibilities of laymen in the late Middle Ages, seventh-century Eastern traditions of the monk as mourner, male tears in the fourteenth century, Jewish bans on polygamy, Henry of Huntingdon, Hereward the Wake, and the Buddha Gautama. All the papers were of a very high standard, it is difficult to choose ‘highlights’ from a consistently strong programme. However, I was very taken by James MacGregor (Georgetown University)’s ‘Dude Prays Like a Lady? Varieties of Male Devotion to Saint George in Late Medieval England’ and Hannah Hunt’s ‘The Monk as Mourner: Eastern Christian Self-Identity in the Seventh Century’ – the former, because it spoke clearly to my own work on chivalric and martial masculinity in late medieval literature; the latter, because it was so far removed from my own research that it served as an engaging and enlightening introduction to something almost entirely new to me.

The second plenary of the conference, in the late morning session of the 7th July, was Professor James Clark (University of Bristol), speaking on ‘The Attractions of the Monastic Life for English Men Between the Black Death and the Reformation’. Drawing on Steve Rigby’s argument that there was a 30% increase in the number of men living in monastic houses in 1500 as compared to 1400, Clark explored the numerous reasons ‘why men became monks’. He argued that the number of dispensations sought at this time to ordain young men below the canonical age suggests that there was a ‘ready supply of young men’ seeking to swell the numbers of older monastic houses; this, Clark asserted, may well mean that the ‘last’ monks of medieval England were also, in many ways, the youngest generation of monks for some time. The main body of Clark’s lecture, however, was concerned with the reasons for this shift, and he explored the idea of monastic ‘career progression’ in depth, as well as the potential for establishing social capital exploited by merchant families entering their sons into monastic houses. Clark’s argument was compelling, and went a long way to dispelling some of the myths of the decay and decrepitude of the decades leading to the dissolution of the monasteries.

The final half-day of the conference offered parallel sessions, followed by the third plenary. The session I attended first had papers from Emma Wells (University of Durham), Marita von Weissenberg (Yale University) and Andrew Fleming (University of Oxford), who spoke on the experience of royal pilgrimage in the late Middle Ages, married male saints (also in the later Middle Ages) and Thomas of Cantilupe respectively. The papers worked well together, and led to some interesting discussions in the question sessions afterwards.

To end the conference, there was a plenary session with Dr. Jennifer Thibodeaux (University of Wisconsin-Whitewater) speaking on ‘The Discourse of Clerical Masculinity: Masculinity and Sexuality in the Writings of Norman Clerics’. Thibodeaux’s paper focussed on the Anglo-Norman pro-clerical marriage tracts that appeared after the First and Second Lateran Councils’ voiding and banning of clerical marriage. With close readings of particular tracts, Thibodeaux argued that the writers drew on certain Pauline writings on marriage to suggest that disorder would necessarily follow a ban on clerical marriage. She went on to illustrate some of the ways in which these tract writers negated the reformed new model of masculinity (based in celibacy) by relying on a ‘householder model’ of the male as husband and father. While, as Thibodeaux pointed out, these tracts were localized both geographically and temporally, this final plenary offered a thought-provoking interrogation of a ‘battle’ for religious masculinity that is often overlooked.

In conclusion, I would offer a warm congratulations to the conference organizers (Dr. Pat Cullum and Dr. Katherine J. Lewis) for putting together such a full and stimulating programme. I know they are in the process of putting together an edited collection based on the conference, and I will look forward to seeing this.
Posted by Medieval Society at 07:07